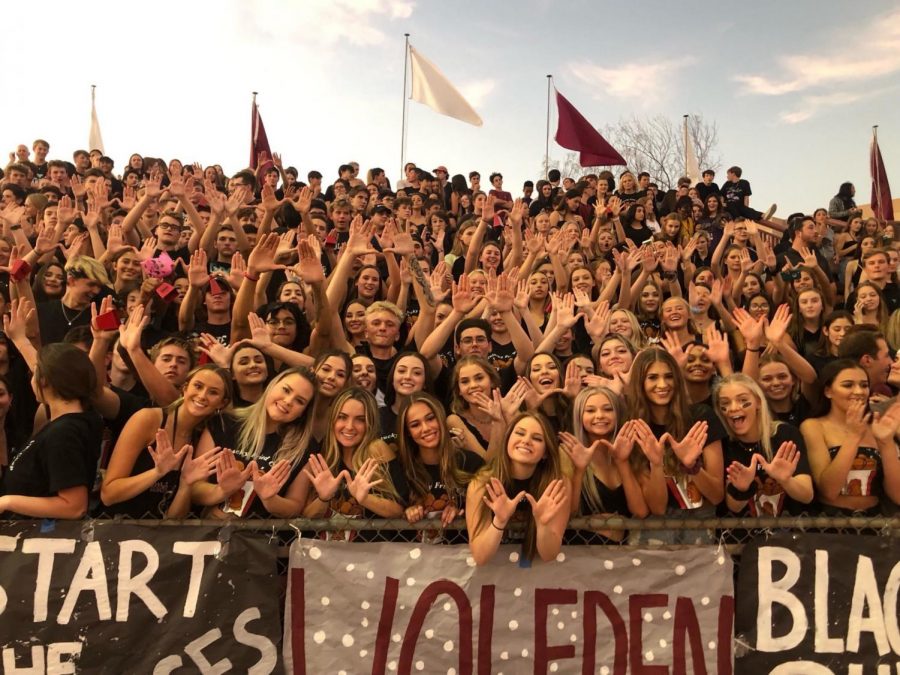 As the Wolves prepared to battle Chaparral, students pack the Wolfden. The Firebirds prevailed, 48-0. 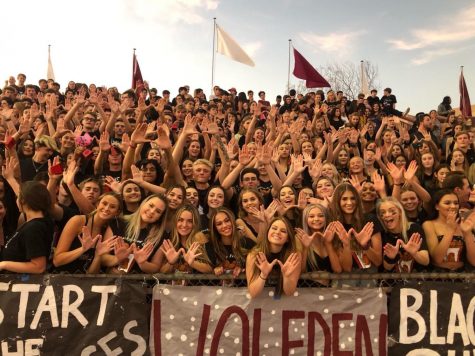 As the pigskin flies through the air, the pommies seem to be cheering endlessly. You hear the school band playing in the distance. You are surrounded by all your friends, packed in the student section like sardines. Welcome to DM football, where the spirits are high.

And, chances are, the Wolves scoring is low.

“Football is just one of those more iconic sports,” said Drake Stanton, a Wolfden spirit leader. “It has a lot of hype behind it, especially in high school.”

Football has long been the symbol of high school sports that brings together a school and community. Students can enjoy cheering on their fellow students while having an exciting night out with their friends.

The Desert Mountain football team, coached by Conrad Hamilton, finished the season with a record of 3-7, but each home game was welcomed by a lively student section, called the “Wolfden.” Regardless of the score, the Wolfden stood for the whole game and filled the stadium with energy.

Football, though not necessarily the most successful sport, has always been the most attended among the student body. Girls golf, for example, finished sixth in the state, with Meg Marty finishing fifth in state.

So why don’t other sports enjoy the same attention and support from students?

Stanton, who hasn’t missed a football game yet in his high school career, credits football’s accumulated hype and popularity in American culture.

“I also think it’s due to lack of promotion of the other sports,” Stanton said. “That’s something we really want to change this year.”

Jay Curtis, who has worked as a security guard at Desert Mountain for nine years, also believes it is because of the excitement that football brings.

“When I was a kid, football games were just exciting things,” Mr. Curtis said. “A lot of kids like to go out and watch a game and hang out with their friends. It’s just the excitement of the sport of football.”

For students who don’t enjoy the game, the stadium has plenty of open areas for friends to hang out, making it the easiest sport for students to socialize. All the various social groups come and blend together, making fans feel like they are part of something bigger.

“As you move up through the years, you move up on the bleachers,” Brooks said. It’s really a place where all the students…come together and we become one school.”

Brooks also believes football games are so widely attended due to the scheduling of the season.

“It is the first sport of the school year, allowing you to start the school year off with a bang,” he said. “Games are always on Fridays at the same time. If they were during the week or at different times, it would be harder for people to go.”

Basketball and baseball games are scheduled throughout the week, making it difficult for people to attend. However, Fridays nights are the perfect way to kick off the weekend with friends.

The idea that football is the first sport to begin the school year is also a major factor. In this way, students don’t have to wait for their favorite sport to start midway through the year.

Even if the Wolves football team continues to flounder, the Wolfden will always be packed because of the added benefits that games offer.

Not only does it attract the most attendance, but also the most involvement among the various student organizations.

Besides the athletes on the field, the band, choir, dance, and pom all play a part in making this such an entertaining atmosphere.

And for the students, it’s not simply a game, but an experience that can’t be matched by any other sport.

It will take a miracle for any other sport to reach the mountaintop that football currently sits on.