Classroom transformed into a courtroom to study WWII war crimes 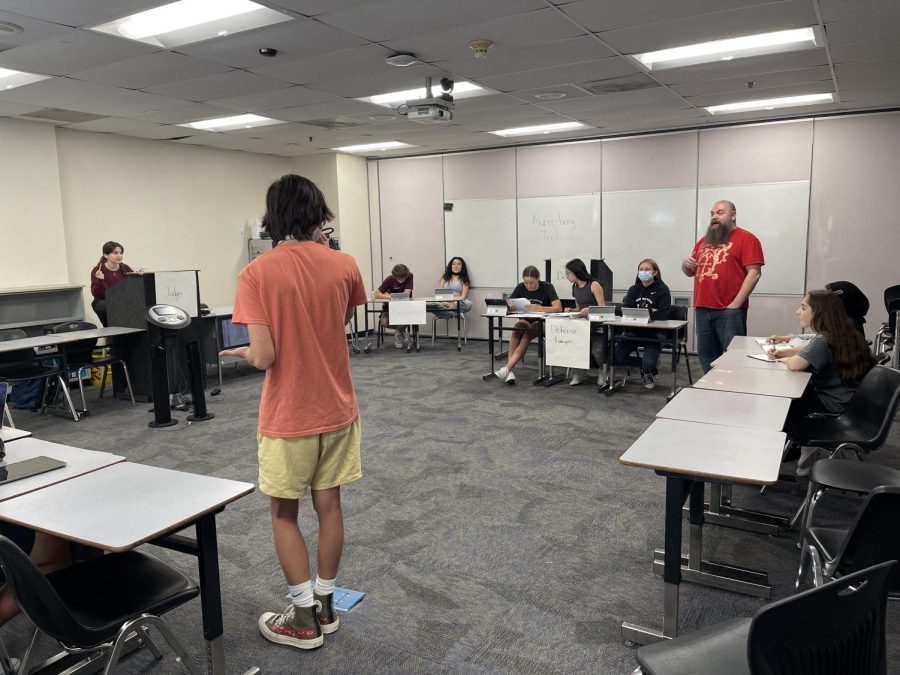 Mr. Knox speaks to the group about the well

If not, that’s the point of the Nuremberg trials, the penultimate assignment in Ms. Jungewaard’s and Mr. Knox’s  International Baccalaureate English I/World History I co-class.

The five classes did not just study the Nuremberg trials, during which former Nazi leaders were indicted and tried by war criminals by the International Military Tribunal in 1945-46.

They acted them out; students acted out the trials, assuming the real-life roles of judges, defendants, prosecutors, defense attorneys, and reporters–holding the trials over several days in May before finals.

“Impact. Cause 1. They’re not just acting out the trials, they have to research the evidence and they have to do everything,” Mr. Knox said. “If I told you that this cake was delicious, it’d be a lot less convincing than if you baked the cake and tasted it. It makes it so it’s something more impactful and will last with you.”

Students said the project, an iconic IB tradition, was challenging.

Students were assigned specific roles in each of the five co-classes:

The judge is in charge of answering questions, making sure guidelines are followed, listening to both sides and deciding on a verdict.
The defense lawyer’s job was to make the prosecution prove guilt and defend the client
The prosecution was tasked with proving the defendants’ guilt.
The bailiff, organizes the trial and swears in all participants.
The defendant must prepare answers in anticipation of prosecution questions.
The reporters were each assigned a country and write a newspaper article for each of the trials as if it was 1946.

Connor Shannon, whose job was reporter, said “managing your stuff” was another challenge. “It’s so easy to procrastinate,” he said.

Students said the reporter job was the most popular because it allows for more creativity because they have to make their own newspaper and political cartoons. The least popular is the judge because of the responsibility.

Angela Garcia said the complexity of the trials and the court process provided its own challenges.

“Interacting with the prosecution” was a challenge, Garcia said, “because you have to know what they are doing.”

The class results, in some cases, differed from the real results. But that wasn’t the point, Mr. Knox said.

“The whole purpose for the trials … was to prove that these people are guilty,” Mr. Knox said. “This was a trial to document and prove that they were guilty.”