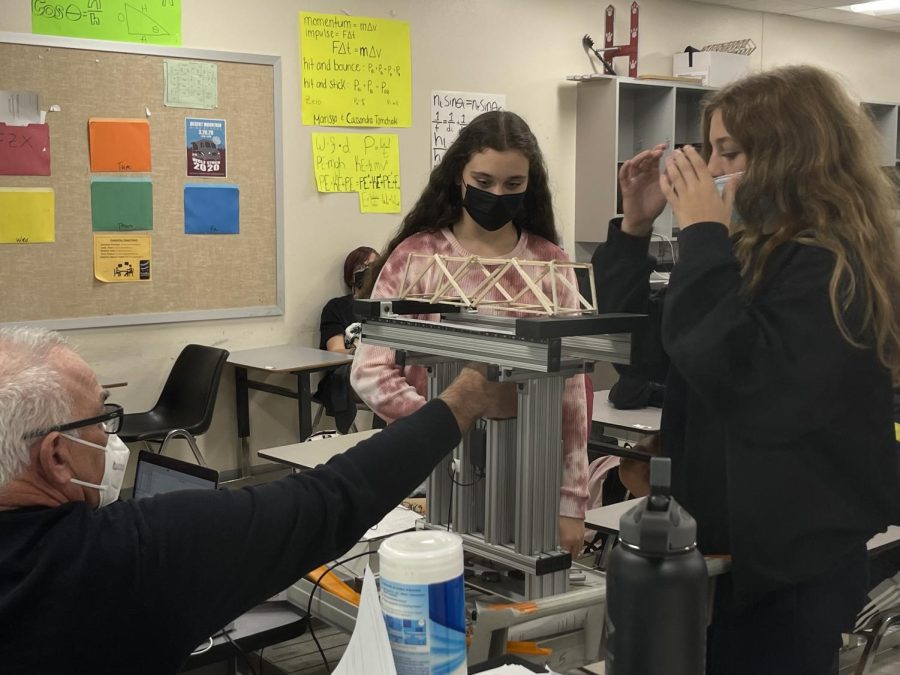 DOOMED TO FALL - Mr. Johnson assisting freshman Giana Despirito and Luca Collins with their bridge testing. "My favorite part of this project was creating the design of the bridge," says Giana. They have been performing the bridge project for over 32 years.

Every year in the second quarter, all of the physics classes participate in the bridge project: to design a bridge out of only wood and glue to hold as much weight as it can, while still weighing very little.

“I enjoyed doing the bridge project. The project helped me better understand physics and how it relates to the real world,” said Amelia Tomasello (9) a student in Mr. Hills physics class.

“I was able to learn that sometimes the lighter the design, the more support it can have,” she said of the project, which took nearly two months. “It was a bit of a challenge but overall it was a good experience.”

Most students said the experience was positive; they learned concepts they would not have retained from a textbook.

But not all students embraced the challenge.

“I did not enjoy doing this assignment and I do not think it helped me understand anything related to physics,” said Becker Teusch (10), who is in Mr. Vining’s class.

“I got a 50 on the assignment,” said Teusch, who said the project negatively impacted his grade significantly.

Mr. Vining, one of the three physics teachers, has been teaching the bridge project for 32 years.

“My favorite part of the project is seeing people succeed on it and designing a good bridge and finding out it really works,” said Vining, adding that the students’ experiences are why he continues to do this assignment every single year.

“It’s not so much physics we are trying to get them to understand,” he said, noting that even students who didn’t think they learned anything benefitted–just not in an expected way.

“It’s how to work together and create an engineering design project.”