Strife of the streaming services 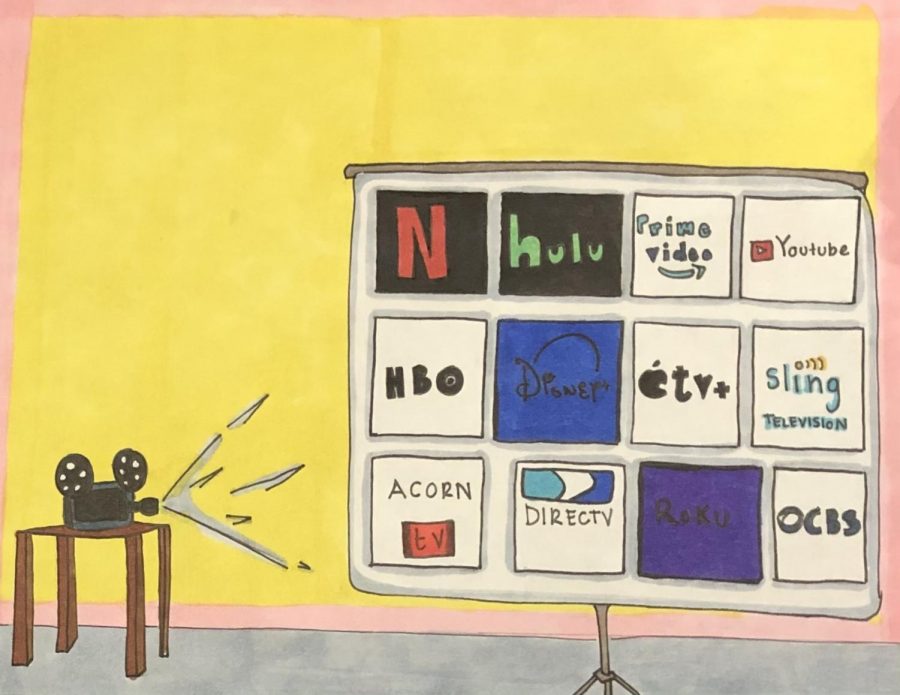 More than half of DM students favor Netflix over all other streaming services, according to a recent Wolf's Print survey.

A world of entertainment. A time of relaxation. An escape from reality.

Welcome to the world of TV shows and streaming platforms enjoyed by most.

Of nearly 100 DM students and teachers surveyed, more than 50 percent indicated Netflix as their favorite streaming platform for various reasons, including the presence of their favorite shows, pleasing organization and aesthetic, the wide variety and range of shows and movies, and the absence of advertisements. Many categories and options are available and easily accessible.

“I like that Netflix recommends me shows or movies that I might like,” said sophomore Janne Sontje Langer, “as well due to my previous viewings and that it has all of the different kinds of categories.”

From the nearly 100 freshmen, sophomores, juniors, and seniors surveyed, about 11 percent of students replied that their favorite streaming service is Disney+, because of its extremely wide variety of all movies, documentaries, and Disney-owned shows . Almost every student who said their favorite platform is Disney+ implied that the variety and abundance of shows and movies present is appealing.

“I really like the idea of every Disney movie or show ever created being on there,” freshman Isaac Williams said, “because Disney owns a lot of the film industry.”

The third streaming service most voted for by DM students and teachers is Hulu with about 7 percent of the votes. The reasons for choosing Hulu as their favorite are very similar to Netflix.

“(Hulu) has my favorite show, the layout is aesthetically appealing, and the price is reasonable,” junior Matthew Colvin said.

Each of these platforms and many others feature an overwhelming numbers of TV shows. Out of a list of Screenrant.com’s “10 most popular 2010s shows watched by teens”, about 40 percent of DM students identified “Stranger Things” as their favorite. The riveting and fascinating plot of Stranger Things makes the show very appealing, especially to teenagers.

About 30 percent of the survey respondents said that the list of the “10 most popular 2010s shows watched by teens” does not apply to them meaning that they did not watch or enjoy any of the 10 options listed.

Many other shows outside of the most popular list are favored for various reasons among DM students and teachers.

“The West Wing, at a time like this, it is a great escape into a more liberal and accepting world, said junior Isabella Marias, “and it is also incredibly well written.”

“The Amazing World of Gumball. Its comedic charm has always been a favorite thing to me,” Huynh said, “even if not many other people watch it at this age.”

Although a large number of people spend time using these platforms, many rarely do. Eighteen percent of the survey respondents said they spend under two hours weekly streaming shows or movies.

“I feel that I can do other things with my time, especially since I don’t usually watch anything with a storyline.” Sophomore Christopher Lessler said, “Most notably, YouTube has a wide range of content that I can access without paying a fee.”

Work and sports were cited as the culprits.

“I use Amazon Prime, but I tend to have a lot of work to do along with off-season practice for the sport I play for the school’s varsity team,” said sophomore Victoria Streeton, “which doesn’t give me too much time to sit down and watch TV.”