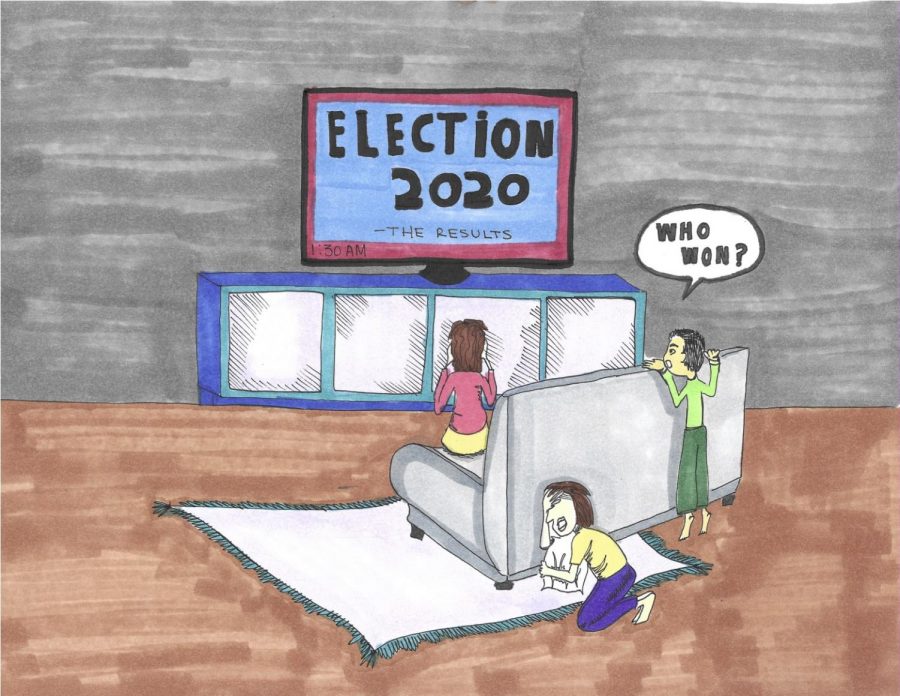 The Wolf’s Print asked about 100 freshmen and sophomores to respond to this prompt: “Tell us your pre-election thoughts, feelings, emotions as election day has arrived. To what extent has it impacted you and/or your family? What are you observing? How has this election affected you? Your view of others? Your perception of the country?” A sampling of their answers, listed below, indicate that regardless of the outcome, we have strong reasons to believe in hope for our future.
“I’m feeling excited and a bit nervous. Very curious as well. In addition to the presidential, election I am excited for the local elections. The election hasn’t impacted my family all too much, but it has affected my view and opinion on my peers. It has also affected other views and opinions on myself. The way I view our government and voting systems has also altered greatly. Everyone has so many different and unique viewpoints and ideas on so many varying topics, how could we put them all into two definite categories? In addition, everyone is very quick to judge and assume things about you and your morals based on the category you identify with more, they don’t have the care to listen to your opinions and beliefs. It has also made me realize the importance of not just voting, but casting an informed vote that you a proud about, rather than voting for whoever you hear about more, or whatever other unjust reason. It is essential that each voter takes the time to learn about who and what they are voting for, especially since this is one of the largest opportunity we get as citizens to have a voice in our democracy in our city, state, and country.”  ‒ Adelina Grotenhuis, 9

“I am very anxious about it, though it has given me more time to really reflect about the US and all the people in my community. The election has indeed made me look deeper into things, not just on a political level, but even more so on how things would affect others.” ‒ Anna Maki, 9

“I do not have too many thoughts about this election. I think that this election goes to show how many people are willing to blindly follow a political power before doing research. I know that it does not matter who wins and whatever happens my life personally will not change, and I know many other people are thinking that way when voting. I think instead people should vote with the fact in mind that there are more people than ourselves. There’s the minorities, LGBTQ+ community, the homeless, the immigrants, etc. As long as you have others in mind and feel the candidate you follow will do the best for them, no one should tell you who or who not to vote for.” ‒ Audrey Mackey, 10

“The election and the results of the election have become a major aspect in my family. My entire family is greatly worried, not even just for ourselves and our family, but those around us and those in danger whether or not Biden wins. I will be watching polling results as soon as news stations start streaming. The election has majorly impacted me. I am heavily involved in politics, and was campaigning over the summer as well. I also have suddenly seen the people around me in a different light. Unfortunately, I don’t quite respect the same people that I used to based on their political beliefs because who you vote for says A LOT about your morals and who you are as a person.” ‒ Bahr Malinovitz, 9

“The pre-election has showed many people’s true colors and truly shows those who are selfish, frustrated, and want to make a change for the better of the community and the American people.  I remember the last election was treated as a huge joke with all the political memes, people voting for Harambe, and many not voting at all.  I’m glad to see more of the American people to be more enthusiastic about voting and I know this election will definitely be an important event in our country’s history.” ‒ Brooke Jones, 10

“I feel as if we have more cards to play. This election is now more important than ever- the outcomes will all personally effect us or our families in one way or another, including my own. Both sides are divided yet firm in their beliefs and now is the time where the true ‘silent majority’ becomes loud at the polls as results are released. Being more active in politics since the 2016 election has something that has made me more aware of national/international issues and has revealed the characters, ‘tolerance’, and moral intents of people. I pray that no matter the results, that the United States can grow to be more accepting of others beliefs and opinions despite the party we each rest on.” ‒ Emily Baker, 10

“The severe circumstances of the time has made for quite the build up to election. Currently this country is not not run in a just way and I’m shocked to see the amount of people still supporting President Trump. My rights are being threatened as well as many other minorities for various reasons, and the appointed Justice Amy Coney Barrett is only making matters worse. In terms of the pandemic, while I am aware that the entire worsening of the virus cannot be blamed on the President, but I would like to note that he has made the already unsafe circumstances much much worse and has no future plan to make change. The country is in a state of unrest because of the virus, the stress of an election, groups threatening to cause terror if Biden wins, and the lack of clarity in what is happening within the government.” ‒ Jay Beckman, 10

“I have lost all respect for anyone who still supports Donald Trump. I have lost many friends over the course of this election due to political discourse and I do not regret it at all.” ‒ Maggie Smith, 10

“I used to be one of those ignorant kids who thought, “oh, my one vote won’t count,” but I have learned that I have a loud, loud voice and its a shame I am not using it to its fullest volume. I have learned now the real importance of voting. I am sad I cannot vote this year, because this seems like a vote no one is going to forget. I have seen on many Instagram accounts I follow that election sress and anxiety is real, and I can feel it. I could feel it before I could put a name to it, and I think that goes for a lot of people whether they can vote or not. I have accepted my stress over this election I cannot participate in as valid and fuel for continuing activism. My perception of America has never been the greatest or very “patriotic” if you will. I have always had this feeling that “the American Dream,” and “the land of opportunities” was never fully true, and 2020 has proved it.” ‒ Marissa Mack, 10

“While I will be affected by its consequences, I am not personally affected by the election. I am, however, worried about the evening of Election Day as the votes are counted without a solid conclusion until some time later. The past year or so I have become much more political due to the importance of this election in particular, and the current situation has diminished my overall respect for the country as more people become violent or refuse reason in the name of their political party’s success. I am concerned that the delay in this year’s election will result in more extreme reactions than usual, and I can only hope (if this election goes the right way) that the future of politics can begin to repair this schism.” ‒ Megan Murphy, 10

“While I will be affected by its consequences, I am not personally affected by the election. I am, however, worried about the evening of Election Day as the votes are counted without a solid conclusion until some time later. The past year or so I have become much more political due to the importance of this election in particular, and the current situation has diminished my overall respect for the country as more people become violent or refuse reason in the name of their political party’s success. I am concerned that the delay in this year’s election will result in more extreme reactions than usual, and I can only hope (if this election goes the right way) that the future of politics can begin to repair this schism.” ‒ Reese Ratliff, 9

“I am absolutely terrified about this election. I know that as a woman in this country my rights could be stripped away if this election doesn’t end the way it should. I am scared for minorities, and members of the lgbtq+ community because this can heavily impact their lives. I am scared for the future of our environment if science continues to be denied. This election has impacted my life because I am very stressed since as a teen I can not vote. Between the stress of the election and keeping up with school work this is a very overwhelming time.” ‒ Samantha Hanson, 9

“I felt uneasy before the election and still feel anxious about the results. As a citizen, even underage I feel its important for one to research each candidate thoroughly before making any decisions. The election and politics in general has impacted my extended family. A difference of opinions can be very dangerous if not handled civilly. I believe our country is a remarkable place; the freedoms we have allow us to voice our opinions and take part in a complex journey. Although our country has failed in some respects and will continue to fail from time to time, I am grateful for the nation I live in. A republic is a beautiful thing; my hope is that people appreciate what we have, even if what we have is not always beautiful.”  ‒ Sydney Grom, 10

“I have been very anxious pre-election because I have been trying to not get my hopes up. I am also excited because I truly believe that we can dump Trump and have a fresh start. The election has impacted my family a lot because we have encountered crazy supporters and numerous arguments/debates. Many Americans are not educated on all of the details and elements that go along with the election and I think that we could do a better job with educating ourselves, learning from reliable sources, and researching in general. I have observed that most people are on edge during the election which is understandable and overall, I believe that the United States is a country in need of change and I can’t wait to see what happens next.” ‒ Zeinab Chami