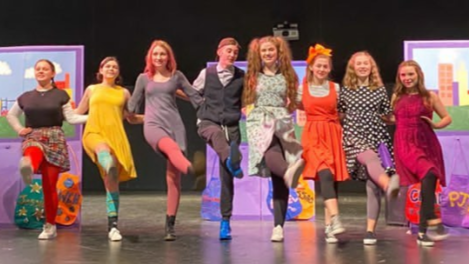 These CTP cast members--Sophie Perlstein, Eli Bizon, Mikayla Glancy, Jack Yampolsky, Lauren Reilly, Caroline Brinton, Isabella Marias, Macie Wilson-- polishe their performance of "Be Kind", performed in January in area elementary schools. "The fact that you are the ones creating a world for kids to relate to and learn from," said cast member Lauren Reilly when reflecting upon the Project, "Hearing the kids reaction almost kind of gives us the same happiness the kids are feeling."

The minds of young children are easily influenced by everything they may see. With today’s environment being filled with fake news, scandals, and a great unease among society, what is being put into the heads of the up and coming generation could have devastating effects for the future that has yet to come.

So what are we to do? With so much negativity flying in from all directions, not everything can be blocked, as shielding children from the world can also have its downside. There needs to be a balance so that young minds can see that the world is still a beautiful place. But how can we create a balance?

We all can make a difference, and right here at Desert Mountain, our theatre program is doing its best in order to play its part. The Children’s Theatre Project, better known as CTP, is a program in which an adaptation of a common children’s story book that institutes a positive message is turned into a short musical and shown to schools all across the greater Phoenix area. The show is meant for audiences K-5, but the message it portrays is effective for all ages. Using wacky characters and original songs written by the cast, the problem within the show is resolved in a fun way for all audiences.

Created during the 2004-2005 school year, the current theatre teacher and CTP director, Marilyn Mumaw, was approached by two of her then students who were looking to make a positive impact on their community through CTP. Having recently graduated New York University with a degree in Theatre Education, Mumaw was on board instantly, as she was in the midst of creating something like it herself.

So CTP at Desert Mountain was born. Since its creation, the Project has reached and inspired thousands of kids over the last 14 years, with it having its 13th production in the 2019-2020 school year.

It may seem like all fun and games, but the impact the shows give off is always the top priority.

“The purpose is to promote theatre and the arts, literacy, and character education (how to be a good person),” says Mumaw,

The idea is for each show to leave a positive message embedded in the viewers minds, so if the show is memorable, then the prime goal of the Project was a success. 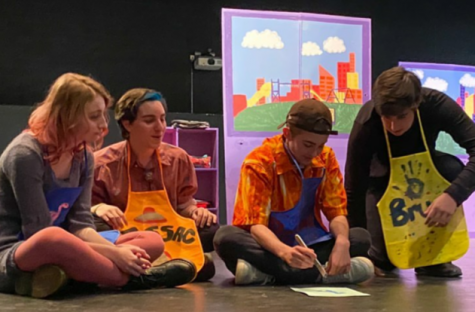 But it’s not just the message that is important, the show itself also plays a role in the importance of CTP.

“CTP is so important to bring to schools,” said student director Carter Warner, “not just for the message of the show itself, but also because it exposes kids to positive role models and showcases the importance of working together to achieve a common goal.”

Unity is something that seems to be slipping away from society more and more as we continue to become divided, which only tears us apart from the inside. Not just one person can do everything, but as a collective, anything can be accomplished.

Working as a team is always vital in any situation. Such ideology is heavily utilized in creating these shows. Once the show is cast, students are responsible for making the show what it is–not just on stage, but on paper as well. The show is not only performed by the cast, but is written by them as well. Each member is responsible for creating a memorable show, in which the show builds on the strengths of each person.

The idea of unity is amplified in the show through the unity of the cast, which can have a greater effect on the audience as the cast members are like role models.

“CTP shows revolve around stories that teach children how to accept and love others, in turn unifying students,” said cast member Isabella Marias (10), which is the what CTP shows strive to achieve.

Each year, the Project’s show is based off a children’s book that has a powerful message and a beneath the surface meaning. For this year’s production, the book chosen was “Be Kind” by Pat Zietlow Miller. The story follows an anonymous narrator, who was renamed PJ for the show, and her journey of exploring just what being kind means.

The story analyzes different scenarios of what the narrator could have done when fellow classmate, Tanisha, spills grape juice on her dress. Each scenario showcases different outcomes of the initial event, which leads to the narrator (and hopefully the audience) learning just what it means to be kind.

“PJ is a really great role model for kids because she has so much empathy for others,” said Trystan Davenport (10), who was cast as PJ for this years production, “and she knows the importance of kindness and how it can impact the world in amazing ways.”

Davenport said that she, “…actually really connects to PJ, so I’m trying to bring a lot of myself to the stage as I play her to give kids the best possible example of how a person can use kindness in their lives. I hope when kids see the show, they will be really inspired by PJ’s example of how to treat others, and strive to always be kind like her because only good things can come from it.” 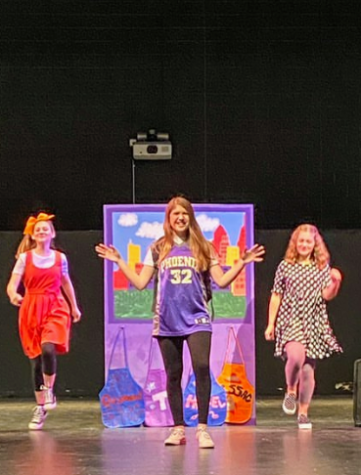 This half hour show consists of unforgettable characters, five original songs, and a powerful message of just what it means to be kind. The CTP cast just finished its tour of six different schools across the valley, some of which include Anasazi Elementary, Pinnacle Elementary (which were the two original schools toured at in 2004-2005), and Desert Canyon Elementary.

Being kind only takes a simple action. Whether it be a high five or a compliment, such an act can go a long way. We all could use a little kindness in this world in which the idea of unity slips from us more and more every day. Next time the opportunity presents itself, why not go the extra mile to be kind and make this world a better place in your own way. So let’s follow the wise words of Mr. Paweski and, “Be kind to each other.”